On 29 August 2016, Judge Lettieri announced the first ever sentence imposed on a legal person by an international or hybrid tribunal.

The judge fined Akhbar Beirut SAL €6,000 for contemptuous newspaper articles. The newspaper’s editor received a heftier penalty: €20,000 for him. 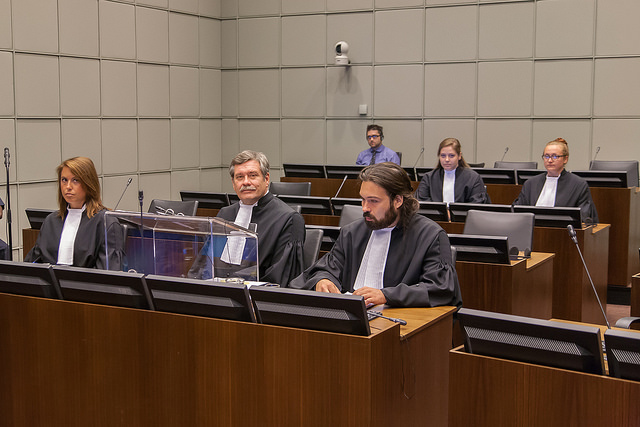 The prosecution had requested a fine of €127,000 for the legal person – calculated at €100 for each day the offending articles were online (Photo Credit: STL under Creative Commons)

23.  In determining the quantum of a fine to be imposed, I find relevant that Lebanese law contemplates a fine in the range of 10 to 30 million Lebanese Pounds for similar conduct, such as in cases where confidential judicial information is published.

24. Given the novelty of sentencing a legal person for contempt of an international tribunal, the foreseeability of the range of fines as set out in the Lebanese Law of Publications, as well as the separate penalty already imposed on Mr Al Amin as an individual, I find that a fine of 6,000 Euros – a quantum roughly equivalent to the minimum fine [10 million Lebanese Pounds] contemplated for a similarly- positioned Accused in Lebanese law – is appropriate in the circumstances to achieve the principles of retribution and deterrence of the corporate Accused’s conduct.

This reasoning raises some questions:

Let’s see whether the prosecution appeals….

On a related note, it looks unlikely that enforcing any fine will be a straightforward exercise. Also on the STL’s website is a recent report from the STL’s Registrar on attempts to formally notify the natural and legal persons of Judge Lettieri’s earlier judgment on  liability. The following spells trouble for enforcement: