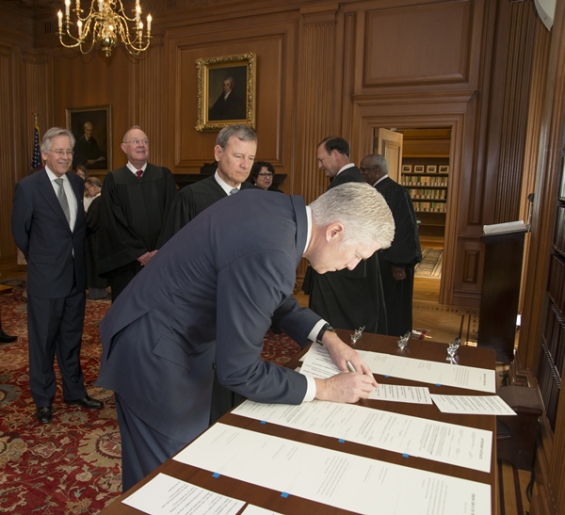 Justice Gorsuch signing the constitutional oath. Will he sign up to corporate liability under the Alien Tort Statute? (Credit: Franz Jantzen, Collection of the US Supreme Court)

The US Supreme Court recently granted leave to appeal (certiorari) in Jesner v Arab Bank plc. The question to be addressed is: “Whether the Alien Tort Statute, 28 U.S.C. §1350, categorically forecloses corporate liability.”[1] Expect a flurry of blog posts and briefs. The full appeal will probably be heard later this year.

This is the first of two posts from me. This one gives a short introduction and discusses some of the background. The second will look at the legal issue in more detail.

There were actually two petitions to the Supreme Court raising the same point. Both appeals stem from decisions of the Second Circuit and concern financial flows through New York bank accounts said to have assisted violations of international law overseas. The second case is Licci v Lebanese Canadian Bank SAL. For reasons not entirely clear from the briefs, the appellants in Licci asked the Supreme Court to prioritise Jesner. That appears to be what has happened; so let’s leave Licci for now (I will come back to it in my second post) and focus on Jesner.

The claimants allege that a Jordanian bank facilitated terrorist attacks in Israel, the West Bank and Gaza between 1995 and 2005. The claims are advanced on various bases. The bank is alleged to be liable for providing accounts through which terrorist organisations solicited and transferred funds, including US dollar “martyr” payments via a New York branch. It is claimed that the bank incentivized and encouraged suicide bombings. The bank denies the claims.

The judgments below (and Kiobel)

The Eastern District Court of New York dismissed the claims so far as they are based on the ATS.

The appeal was argued before the Second Circuit in December 2014, but it took until 8 December 2015 for Judges Sack, Chin and Carney to issue their judgment affirming the dismissal.

The basis for the dismissal merits a short detour.

In 2013 in Kiobel (a case involving allegations that Shell was complicit in human rights violations in Nigeria), the Supreme Court clarified that there is a presumption against extraterritoriality inherent in the ATS, which is only displaced by conduct which touches and concerns the United States with “sufficient force”. The facts of Kiobel, and many cases since, did not meet that threshold.

The first round on corporate liability is referred to as Kiobel I.

The second round on extraterritoriality is Kiobel II. 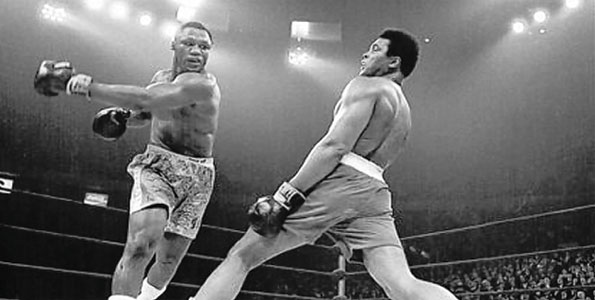 Ali dodging Frazier during the Thriller in Manilla. In Kiobel the US Supreme Court avoided the issue of corporate liability (Credit: The Nation)

Like Jesner, the claim in Kiobel was filed in New York.  In Kiobel I on 17 September 2010, a majority Second Circuit panel (Judges Cabranes and Jacobs) held that we must look to customary international law to identify any cause of action and viable defendants for ATS claims. Customary international law did not, in their assessment, recognise corporate liability with sufficient uniformity such as to ground a claim against Shell. In other words, no corporate liability under the ATS.

Judge Leval wrote an 88-page dissent from this reasoning, the upshot of which was that the majority had, in his view, created an “unprecedented concept of international law that exempts juridical persons from compliance with its rules.”

The Second Circuit then split on whether to rehear Kiobel I before all judges in the Court of Appeals.[2] The result was a draw: five judges voted in favour, five against; so the original decision stood.

That the Supreme Court then avoided Kiobel I for Kiobel II, dismissing the case on different grounds, meant that the reasoning of Judges Cabranes and Jacobs has remained the law for the Second Circuit. 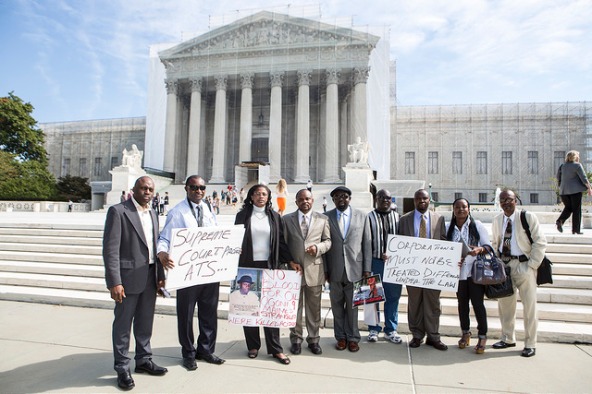 Outside the US Supreme Court when oral arguments were held in Kiobel II on 1 October 2012 (Credit: Earthrights International under Creative Commons)

Some of the circuits split

The Ninth Circuit’s decision in Doe v Nestle is of particular note because the Supreme Court denied leave to appeal in that case as recently as 11 January 2016.

So far as I can tell, the Tenth Circuit (where Justice Gorsuch sat before his appointment to the Supreme Court) has not addressed the issue of corporate liability under the ATS.

Which takes us back to Jesner v Arab Bank plc.

Judges Sack, Chin and Carney dismissed the claims on the basis that they were (through somewhat gritted teeth) bound by the result in Kiobel I.

Then on 9 May 2016 the Second Circuit split again on whether all the appeals judges should revisit the corporate liability issue. Judges Chin and Carney (who had earlier considered themselves bound by Kiobel I) reasoned that the issue should indeed be revisited. Judge Pooler argued that Kiobel I was wrongly decided. A majority of the Second Circuit’s judges, however, were unpersuaded and voted against revisiting Kiobel I. The split included the following passage by Judge Jacobs (joined by Cabranes, Raggi and Livingston):

the panel’s angst in having to follow Kiobel I was self-inflicted. The appeal could have been resolved under Kiobel II; if the problem was lack of briefing, briefing could have been ordered; if finding the right answer under Kiobel II was a strain on the panel, it could have remanded; if the easiest course was to follow a precedent that the panel dislikes, it could have done what appellate judges must frequently do: swallow hard. The one course that makes no sense is to force difficulties, reel off dicta criticizing our precedent, and seek in banc consideration of a doctrine that now has sharply reduced application. Going in banc on this would do nothing but supply catnip for law clerks looking to teach. 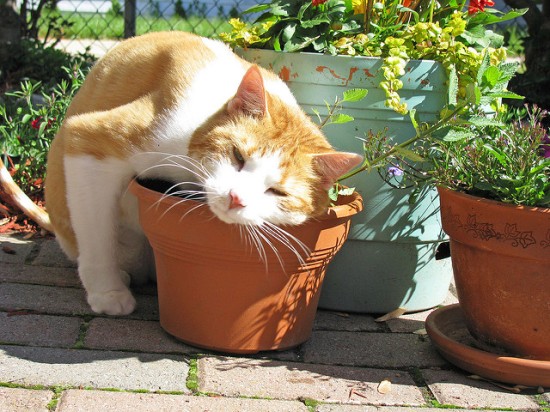 The petition to the Supreme Court followed in October 2016, which was granted on 3 April 2017.

The question of corporate liability under the ATS has followed twists and turns. The Supreme Court’s recent decision to take the case of Jesner v Arab Bank plc means that many of us will be re-reading the briefs from Kiobel I (possibly while stocking up on the catnip).

[1] 28 U.S.C. §1350 gives district courts “original jurisdiction of any civil action by an alien for a tort only, committed in violation of the law of nations or a treaty of the United States”. The provision was included, in slightly different form, in the Judiciary Act of 1789 – one of the first acts of the first United States Congress.

[2] This process is referred to as en banc, although in some Circuits it is spelled in banc.